The Flowering of Bee Sieburg 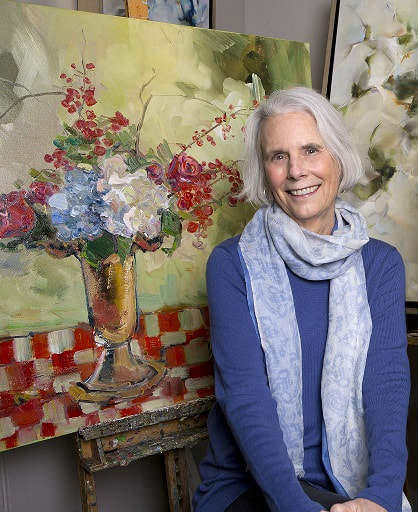 Bee Sieburg
Artists, out of necessity, have traditionally used their limited number of canvases over and over as they develop newer ideas.

The art-history term pentimento describes how an artist’s previous work on the same canvas begins to bloom through the topmost layers. The luminous back-story behind, below, and beneath sends hints of itself to the surface.

Bee Sieburg's life story is a lot like that.

After a professional lifetime producing voluptuous floral arrangements and displays for weddings and grand catered events, she now paints - her first love. But for the longest time, she painted no flowers whatsoever.

“Oh, I tried painting flowers, but it didn’t work for me,” she says. “Besides, flowers are a medium all unto themselves. Where I grew up, in Tarboro, North Carolina, everybody knew how to do flowers.” Recently, though, she has begun to paint flowers, connecting her present life with her former one.

When Bee moved to Asheville in 1997, Wildflowers, which she had run largely out of her basement, blossomed into a storefront and shop in Biltmore Village called The Gardener's Cottage. The original Wildflowers pansy logo remains there to this day, although Bee sold the business in 2004.

The sheer exuberance of being a cancer survivor, diagnosed as stage three in 2003, lights up Bee's vivid, light-hearted and reach-out-and-touch-the-moment oils. "That diagnosis helped me see clearly what I wanted to do with my time and energies," she says. "I am absolutely loving life!"

After graduating from UNC-Chapel Hill with a BA in Arts Education in 1964, Bee taught art to elementary school children prior to being drawn into the floral arranging business by a catering friend. She raised two children along the way, one of whom, Molly, is now an artist in her own right and shares a studio in the River Arts District in Asheville, North Carolina.